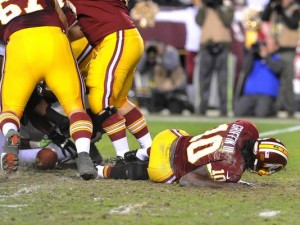 With NFL fans and the popularity of  Robert Griffin III, the question has been raised, how will RG III do after knee surgery? And will he be able to match the speedy recovery of Adrian Peterson?
According to reports Dr. James Andrews repaired Griffin’s anterior cruciate and lateral collateral ligaments on Wednesday January 9, 2013. The average return to sport with ACL reconstruction is in the 1-2 year range. But with today’s advanced techniques the outcomes have gotten better and better. Injuries which were once career ending are now just a 1 year hiatus from the game.

When considering when RG III will return to NFL football, there are many, many factors to consider. In my opinion here are a few of the  main considerations for a full recovery:

Moving too fast or too slow can impair progress. And coming back too soon can lead to re-injury or even new injuries.

So by now the rehab process should have begun, with physical therapy well underway.  The early recovery seeks to heal the acute affects of surgery swelling, lack of motion, and lack of muscle firing, while protecting the repair. The second phase of recovery involves strengthening, coordination, balance and muscle re-education. In the third phase,  strengthening, conditioning, coordination and agility are progressed, while in the forth phase the player moves into functional training and conditioning in preparation for return to sport. Each phase has criteria for advancement. In the end, successful completion of each phase of recovery and timely progression to the next will determine his return to football.

“When adversity strikes you respond in one of two ways….You step aside and give in..Or you step up and fight.” Robert Griffin III

Given his attitude, determination and strength of character,  I’d bet on Griffin III’s return to football to be sooner than later. I wish him well and look forward to see him back on the field. He seems to be a great role model, and a great asset to the NFL.